I thought evaluating performance would be easier than this. I have three vice presidents, operating the same business in three different countries. I need to be able to compare them in order to prepare compensation recommendations to the board. The problem is that there are so many variables that each of the managers can make some claim to having the best performance. I hope our consultant can help me sort this out.

Barrows Consumer Products is a large, multinational consumer products firm based in the United States. In the mid 1990s, Barrows made a strategic decision to enter the transitional and emerging markets. Each of the new markets was led by an executive vice president and organized along country lines. Barrows believed this form of organization made it easier to evaluate each country and also made it easier to exit from a country it identified as unprofitable.

One of the new markets developed by Barrows was Southeast Asia. Although there was significant competition in the region from other Asian and European competitors, the management of Barrows believed its advantage was in its portfolio of products with widely recognized brand names. Barrows chose three countries to enter initially: Indonesia, the Philippines, and Vietnam. At the time of the decision, all three appeared to represent significant growth opportunities.

Barrows’s policy in these new markets was to install a Barrows manager originally from the country who was willing to return and manage the business. Barrows believed that this policy resulted in additional goodwill and also allowed the managers to use their knowledge of local business customs. (It also hoped to take advantage of any personal ties the managers might have in business and government, but this was not included in its policy statement.) A simplified organization chart for the Southeast Asia Emerging Markets Sector is provided in Exhibit 14.12. 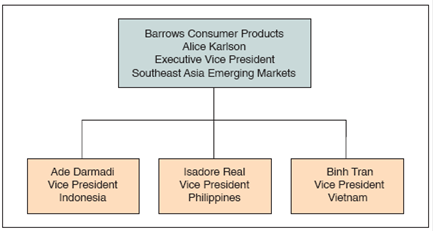 Barrows has a well developed set of performance measures that is used for managerial evaluation. The two primary measures that are used for groups in the United States, Canada, Western Europe, and Japan are division (or country) profit and return on investment (ROI). Return on investment is computed by dividing division (or country) operating income (essentially, income before taxes) by division (or country) total assets. While profit and ROI are commonly used in much of the company, the executive vice presidents in emerging market sectors are given considerable leeway in evaluating their individual country vice presidents. This performance evaluation is important to these managers. Compensation in the Southeast Asia Sector consists of salary and bonus. The bonus pool for the three managers is dictated by corporate headquarters of Barrows in the United States. The bonus pool formula is not explicitly defined although there is a clear correlation between the size of the pool and the profitability of the sector, however measured.

The allocation of the pool to the individual country managers is at the discretion of Ms. Karlson, the sector executive vice president. In March of year 9, the financial results from the three countries for year 8 have been tabulated and she is now evaluating them. Because this is her first year in this position, she has not had to perform this task in the past. She has hired a local compensation consultant to advise her on the relative performance of the three managers.

The financial staff at sector headquarters receives the financial statements from the controller’s staff in each of the three countries and ensures that the statements are consistently prepared in a common currency. The income statements for year 8 are shown in Exhibit 14.14. The balance sheets as of the beginning of year 8 are shown in Exhibit 14.15. Ms. Karlson discusses the source of her concern.

When I look at the financial statements, I can see immediately that Ade [Darmadi, V.P.—Indonesia] has outperformed Isadore [Real, V.P.—Philippines]. But Indonesia is a much larger market than the Philippines. So I calculate ROI to try and adjust for size and now Isadore is outperforming Ade. When I mention this to Ade, she counters that although Indonesia is larger, it is also poorer and geographically dispersed, leading to higher distribution costs. The only thing I can say for sure is that Binh has not developed much of a market.

I also wonder whether headquarters is looking at the right performance measure. I recently attended a seminar on new performance evaluation measures and the seminar speaker spent quite a bit of time on something called 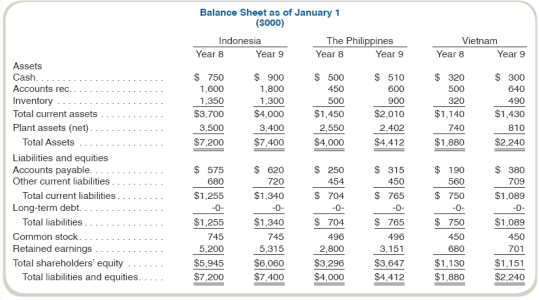 economic value added (EVA). The way I understand it, EVA adjusts profit and subtracts a capital charge from it. The capital charge is the cost of capital multiplied by the net assets (total assets less current liabilities) employed. I guess I would use the cost of capital of 20 percent after tax that corporate policy requires I use for investment decisions. The problem I have is I am not sure how to adjust income, which is an accounting measure, into something more meaningful. We don’t do any R&D here, so the only item on the statements that was mentioned at the seminar is advertising. (Note: Advertising expenses for the previous three years are shown in Exhibit 14.16.) When I was working in the United States, I came across a study stating that advertising expenditures in our industry have an expected life of about three years. If that’s true, then clearly the way we account for advertising is wrong and I should adjust these results accordingly.

There are other issues that I think are more ambiguous. For one thing, Binh developed a new approach for delivering products that cut distribution costs in Vietnam. At our annual retreat, he shared his ideas with Ade and Isadore about how they could adapt this to their markets. In addition, many customers want their stores in Vietnam and Indonesia to be entirely served from Indonesia, so Binh receives no credit for that business.

a. What are some of the factors causing the problems in measuring performance in the Southeast Asia Sector?

b. Rank the three countries using each of the following measures of performance:

c. Are there other performance measures you would suggest? How would you measure these?

d. Write a one page memo to Ms. Karlson explaining which country performed best. Be sure to explain your reasoning.

Fill in the order form

Issue instructions for your paper in the order form. Include a discount code if you have one. Your account will be created automatically.

Your payment is processed by a secure system. We accept MasterCard, Visa, Amex, and Discover. No information is shared with 3rd parties.

Clarify all the questions with customer support representatives and upload all the necessary files for the writer to use.

in the simple deposit expansion model a decline in checkable deposits of 1 000... what is the minimum price per person that gail should quote for the job 61...
Scroll to top